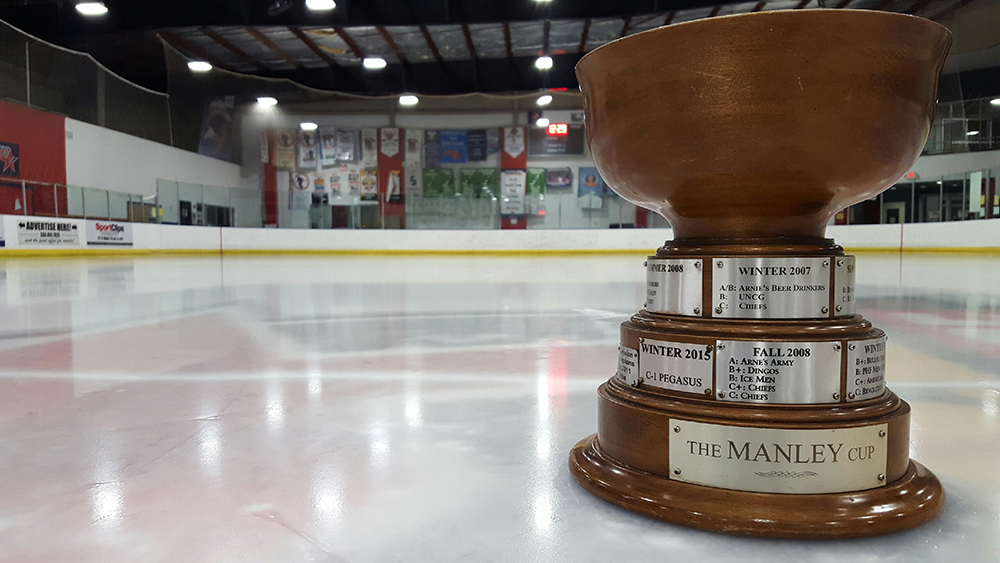 “I was thinking it would be a great idea to have a trophy to present to the division champions of the Greensboro Adult Hockey League at the conclusion of each season.”

These words jokingly uttered at the Spring captains’ meetings in 2006 by Lord Bob Riedlinger of Greensboro. When the league administrators and captains agreed, Lord Bob Riedlinger set the wheels in motion. He contacted his father, Gordon Riedlinger, known throughout his hometown of Kitchener and province of Ontario as a master wood-worker to discuss taking on the honor of producing such a trophy.

As the hockey gods would have it, a mighty storm soon whipped through the town of Kitchener, Ontario claiming many of the local hardwoods. When “Gord” walked onto the back porch of his home, he had a vision. To many, it would look simply as a downed Sugar Maple. To “Gord,” it was his favorite Sugar Maple. A Sugar Maple that had stood for some 130 years. He envisioned a way to keep this inspiring timber alive and enjoyed by many for years to come.

Gordon Riedlinger began to cut and carve from this historic tree. Sure he had created many beautiful pieces of furniture from tables, chairs, and armoirs, to entertainment centers, bookshelves, and yard pieces. But he had never been appointed such an honor. Legend has it that “Gord” nearly severed a finger during its creation. “All part of the game” he chuckled later. In the Fall of 2006, his masterpiece was complete. In the Winter of 2007, Arnie’s Beer Drinkers, the UNCG Hockey Spartans, and the Chiefs all hoisted what Lord Bob Riedlinger called the Manley Cup as reward for their grueling playoff runs. To this day, it is still known by this name.

Each season, some 300 adult leaguers covet the honor and thrill of hoisting the Manley Cup. Ask anyone who has won this cup and they probably have a great story they will share about their time spent with the cup. Join us today and join the quest for the cup!

UPDATE: The curse has ended! Bob Riedlinger, son of Gord, has finally raised the Manley Cup in victory! His Pounders took the title in the B1 division this past summer. Although Bob was on injured reserve, he coached his team to victory from behind the bench. Congratulations Bob on hoisting the most prestigious adult league trophy in the world!